Hegarty was a firefighter for 20 years, an advocate for mental health and worked with the B.C. Burn Fund 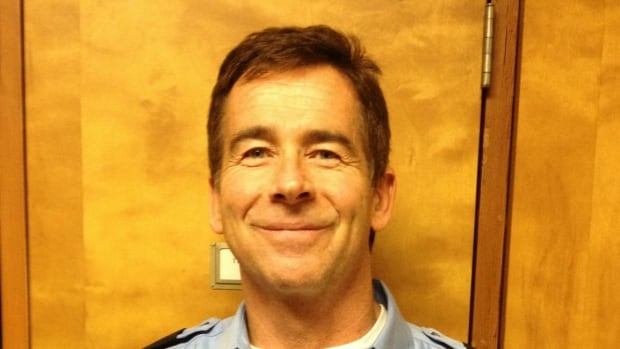 A memorial service for Kevin Hegarty, the Surrey, B.C. firefighter who took his own life on March 1 after a battle with post-traumatic stress disorder, was held on Monday.

Hegarty, 53, was an acting captain and had been with the Surrey Fire Service for nearly 20 years. During his career he advocated for mental health, worked with the B.C. Burn Fund and assisted the Surrey Fire Fighters’ Charitable Society.

“Kevin was a champion advocate for mental health,” Surrey Fire Fighters Association President Mike McNamara said, speaking for the family after the service.

“He suffered from post-traumatic stress disorder, and in the end he lost his battle,” McNamara said.

Firefighters, police, military and other first-responders in emergency situations are among those who can suffer from job-related post-traumatic stress.

A number of firefighters attended the memorial service for Kevin Hegarty held in Surrey, B.C. (CBC)

PTSD can be triggered by experiencing a terrifying event, or a series of traumatic incidents. Symptoms can include flashbacks and severe anxiety.

The Tema Conter Memorial Trust, a King City, Ontario-based charity which aims to provide psychological support for Canadians working for public safety organizations, estimates that 10 people working in emergency services and the military committed suicide between Jan. 1 and March 4 this year.

About eight per cent of the general population and 16-24 per cent of those working in emergency services suffer from PTSD, according to the trust.

Stephanie Conn, a registered clinical counsellor in private practice in Vancouver and a former police officer, is working with the Surrey Fire Service to help them take preventative measures.

“Any number is too high if you ask me,” Conn said. “I think you have to have education on the front end for people entering [these kind of] professions and you have to include their family members to prepare them to know how to cope.”

Conn also thinks work should be done to remove the stigma of stress so that people will look for help when they need it.

Hegarty tried to help others with the issues they faced at work.

“We cannot emphasize enough the significance of the efforts Kevin made to try and help all workers with the difficulties that come with the service we provide,” McNamara said earlier in a statement released March 24.

A number of firefighters attended the memorial service for Hegarty, which was closed to media.

In lieu of flowers, people were asked to make donations in Hegarty’s memory to the Surrey Fire Fighters’ Charitable Society, the Canadian Mental Health Association, or the B.C. Burn Fund.

With files from Jesse Johnston and Pierre Martineau